Manhwa / The Ruler Of The Land 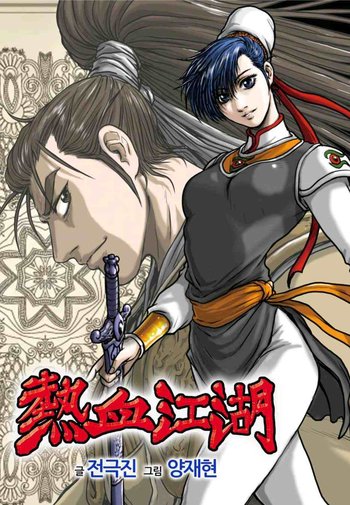 The Murim (martial art world) is divided into two opposing forces: the Jongpa (or White Force, the "righteous" martial art sects) and the Sapa (or Black Force, the evil martial art sects). The two have battled for many years but unable to overcome each other. For several decades, things seem to be at peace on the outside, but it is only a matter of time before war erupts again. In the shadow, a mysterious organization starts to make its move, its agents penetrate both sides, stirring up conflicts. A wrong move at the wrong time would mean certain death for anyone involved or worse, the outbreak of another war.

A lecherous yet strangely heroic and trustworthy young man. He has no formal training in martial arts but possesses phenomenal skill in quigong and ability to copy other martial artists' techniques. He has no desire other than partying, wooing women and perhaps, one day meet the love of his life and start a family. And yet he is the sixth disciple of the dreaded Cheon Ma Sin Gun, founder of Black Wind Order and leader of the Sapa and was given the Flaming Dragon Sabre, the greatest treasure of the martial art world. One day he ran into Dam Hwa Rin, the Bishōnen swordman who is on a quest to find her missing grandfather, the famed Sword Emperor. Despite initial hostility, they become friends and travel the Murim together. During their journey, they make friends (and foes), improve their skills, learn more about the rift between Jongpa and Sapa, the emerging threat of the mysterious Sinji and perhaps, who Han Bi Kwang really are

The Ruler of the Land (Hangul: Yul Hyul Gang Ho, Vietnamese: Hiệp Khách Giang Hồ) is a Korean Manhwa written by Jeon Geuk-jin and illustrated by Yang Jae Hyun and was first released in 1994. Notable for its humors, Fanservice and copious amount of awesomeness.

Has a character sheet that is under construction.

This manhwa provides examples of