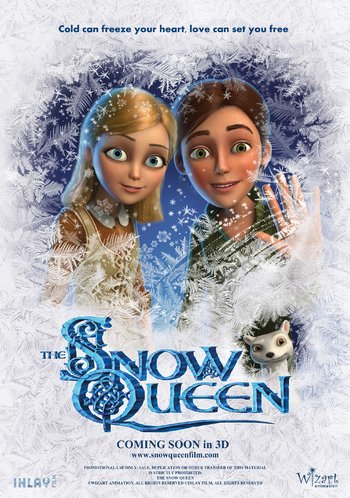 The Snow Queen is a 2012 Russian computer-animated adaptation of The Snow Queen, directed by Maxim Shveshnikov and Vladen Barbe. It was released in Russia in 2012, and the international version, dubbed into English, was released on January 3, 2013, nearly a year before Frozen (2013). It followed the original Hans Christian Andersen story to a point, but also added backstory for the Snow Queen, took out most of the evil mirror/devil aspects, and tried to be darker and edgier.

Wishing to create a world where clean lines replace emotions and the wind cools human souls, the Snow Queen has blanketed the world in ice and set out to destroy all art. According to the predictions of a magic mirror, the last threat to the Snow Queen comes from the master glass-maker Master Vegard, whose mirrors reveal one's true self. The Snow Queen's polar wind kills Vegard and his wife Una, but they hide their son Kai and daughter Gerda. When Kai grows of age, the Snow Queen realizes he poses a threat to her and captures him... and Gerda goes out to save him.

The film was followed by three sequels, The Snow Queen 2: The Snow King, The Snow Queen 3: Fire and Ice, and The Snow Queen 4: Mirrorlands. The second film is set a year after the Snow Queen's defeat. Orm has thawed out the other trolls, but in an attempt to impress Princess Maribel and her uncle the King, he lies about defeating the Snow Queen. When the North Wind, working under a mysterious Snow King, abducts the princess, Gerda, Kai, and Orm must save her—provided they can work together long enough.

The third film deals with Gerda's wish to find her parents who were taken away by the North Wind. Along the way Gerda and her friends discover an ancient magical artifact of the trolls, the Stone of Fire and Ice. From that moment on, things don't go according to the initial plan, as the mighty Fire King threatens the world, and Gerda becomes possessed by the Snow Queen's vengeful spirit.

The fourth film deals with a king who almost lost his family to the Snow Queen, finding a way to remove all magic from the land by banishing all magic-users to the Mirrorlands. Gerda must stop him, as her own power is her faith in kindness and friendship. Along the way, she's helped by trolls, pirates and even the Snow Queen herself.