Webcomic / The Far Side of Utopia 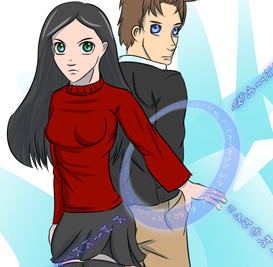 Peter and Kallisto before... You know.
Advertisement:

The Far Side of Utopia

is a webcomic set 20 Minutes into the Future in an Urban Fantasy world where magic and technology starting to meld together. Several of the cast are Dimensional Travelers and there at least several worlds/dimensions involved.

It largely follows Peter Kepler and the various students of Levinworth Academy (a Magitek mage school - where the known programs are "Magic Use and Engineering" and "Magic Technology and Theory"...).

There is Peter, a rogue IDS (Interdimensional Security) agent with an unknown agenda, and his group. Tyler, the head of the MSB (Magic Security Branch) which is either a government branch, an afterschool club, or likely both, and Kally, an active IDS agent who is supposed to be keeping on eye on things. In addition, there is an increasing (possible to the point of never ending) list of background characters that show up, quickly going into Loads and Loads of characters territory.

It updates Monday, Wednesday, and Friday.