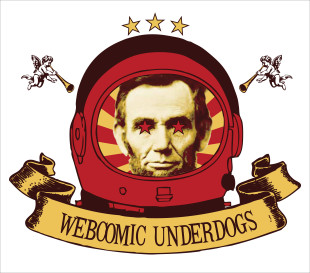 Because nothing says Underdogs better than Lincoln... in space
Webcomic Underdogs is an arts and entertainment website/forum founded by Marisa Brenizer and Michael Yakutis. The site is dedicated to the discussion of all subject matter related to webcomics and building community between webcomic creators. It began as a Facebook group in 2012 and moved to its own domain in 2013. One of the main features of Webcomic Underdogs is a weekly Spotlight, for which members may submit their webcomic. Spotlight includes open critique from other members, an interview, promotion of the webcomic, and some fanart from the founders and other members.
Advertisement:

Webcomic Underdogs also has some blogs, a live chatroom, and a forum. The site can be visited here