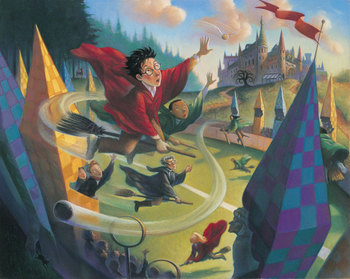 Harry Potter: The Chasers throw the Quaffle and put it through the hoops to score. So — that's sort of like basketball on broomsticks with six hoops, isn't it?
Oliver Wood: What's basketball?
— Harry Potter and the Philosopher's Stone
Advertisement:

The sport equivalent to the Fake Band: A "real" sport invented for the work itself which is played in the 'verse of the work. Different from Calvinball in that the sport actually has consistent rules that could be followed, at least in theory, although for obvious reasons there will likely be some gaps in our knowledge of the game rules.

These are sometimes defictionalized if the source material gives enough information for fans to base it on (and sometimes even if it doesn't). How difficult this is to do and how accurate a recreation is even possible varies pretty significantly, of course. A fake card game can be created pretty easily, while a sport requiring advanced technology, magic, or superhuman athleticism just to play will obviously be impossible to accurately recreate. That said, you'll be amazed how creative fans can be.

Sometimes a Blood Sport. If a fighting sport, may involve Fantastic Fighting Styles. Related to Improbable Sports Skills for sport skills that are impossible in Real Life, which may or may not involve a Fictional Sport.

Not to be confused with Fantasy Sports.

Now this is podracing.

Now this is podracing.