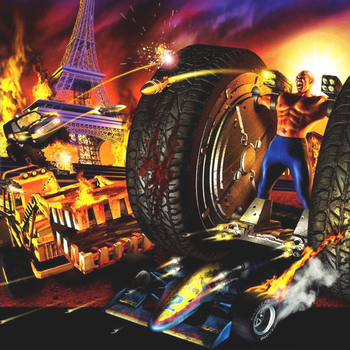 Taking demolition derbies to their Logical Extreme since 1995!
Vehicular Combat is a Video Game genre in which the action takes place inside motor vehicles (often armed), whether they be cars, boats, or sci-fi craft. These games usually have one requirement; the destruction of all enemies. Some games add racing, escort, Wide-Open Sandbox (within limits; players generally must kill or be killed before time runs out, but other than that, can traverse the level freely) or other gameplay elements, while others are barely above the Shoot 'em Up level. Generally, these games focus on fast-paced action, as opposed to Role-Playing Game elements.
Advertisement:

Generally, Vehicular Combat gameplay works in one of two ways: The player is the same individual throughout a career, and must upgrade and modify his/her vehicle with better weapons, parts and armor to beat back increasingly more difficult challenges, or the player may choose from a variety of different vehicles, each with its own unique skills and abilities. Interstate '76 is a good example of the first style, while the Twisted Metal series is a good example of the second style. Some games use a mix of both aspects, allowing a player to choose a vehicle and then modify it accordingly.

Most of these will be Driving Games.

Tropes common to the Vehicular Combat genre include: