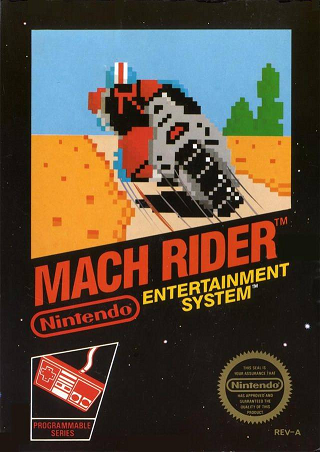 YOU ARE MACH RIDER !!
Advertisement:

Mach Rider is a 1985 futuristic driving launch game for the Nintendo Entertainment system (NES) created by Nintendo. It was first released on October 18, 1985 for the Nintendo Entertainment System in North America, as one of the 18 initial launch games. A month later, on November 21, 1985, the title was released in Japan. On March 15, 1987 it was released in Europe and Australia. The Famicom version can use the Family BASIC Data Recorder to save custom tracks. Although the feature to save your custom tracks was only available in the Famicom version in the original releases, all versions of the Virtual Console release can save custom tracks. Mach Rider takes place in the year 2112, and planet Earth has been invaded by evil forces driving vehicles known as Quadrunners. The player controls Mach Rider, who travels from sector to sector on a motorcycle, searching for survivors and destroying the enemies in his path.