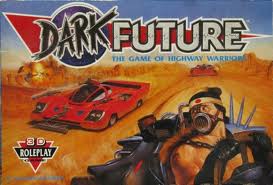 "Computer says you're clear, but be out by 22:00 or you're going back to your San Berdino sleaze-pit in an ashtray!"
Written on the walls
And the open road,
NoGo Ghetto to
the Policed Zone
— D-Rok, "King Hibited"
Advertisement:

Dark Future was a tabletop miniature wargame produced by Games Workshop and originally published in 1988. Initially developed by writer Marc Gascoigne as a Cyberpunk Role-Playing Game, he combined his concept of the titular dark future with fellow GW employee Richard Halliwell's idea for a car-racing game, using mechanics which Gascoigne had originally developed for the Judge Dredd RPG in the supplement Slaughter Margin. The game came in a box set containing several cardboard sections of road, plastic vehicles and a rulebook. The car miniatures were roughly 25mm scale. Players took on the role of a Sanctioned Operative, a licensed bounty hunter whose job was to clear out highway sections of the vehicle gangs causing trouble or that of a Renegade; one of the gang members.

Dark Future was set in the near-future year of 1995, with a world controlled by global megacorporations where the populace was divided into those who lived in the increasingly barren deserts and wastelands and those who lived in the cities. Even city-dwellers were further demarcated into the fortunates who could afford to live in corporately-controlled Policed Zones or PeeZees and the have-nots who lived in the un-policed, dangerous slums referred to as "NoGos." The game primarily focused on the United States; environmental damage having caused a significant increase in desertification, caused by over-farming; over-industrialization and increasing water shortages and drought. The original rulebook describes the waters of the Pacific Coast as being "too polluted to evaporate," and Wyoming, Nebraska and Colorado forming what's officially designated "The Great Central Desert." Utah, Nevada and Arizona have developed into a sort of North American Atacama Desert, and Manhattan has had to build huge concrete flood defences that see Long island connected to the mainland.

Law Enforcement in the setting has been extensively privatized. The Deregulation of Law Enforcement Act in 1985 and the subsequent Enderby Amendment allowed individuals with an appropriate government license to conduct law enforcement (including the use of deadly force) and towns, cities and neighbourhoods to tender contracts for individuals and companies to carry out law enforcement duties on their behalf. The aforementioned Sanctioned Operatives are a product of this deregulation, and range from independent freelancers to fully-fledged companies, referred to as Agencies, with their own private armies, legal and PR departments. There's even sub-contracting to be done, as Policed Zone companies hire independent Ops to conduct off-the-books assignments, detective work, espionage and more dangerous tasks they don't want to deal with.

Gameplay took place on the cardboard track sections; simulating the high-speed chase along the roadway. Road layout was generated randomly from a starting point of three straight sections, until a total of ten sections had been placed. Various non-mobile hazards such as mines, sand drifts, rubble and so on could also be placed on the road, and the game had detailed rules about speed, manoeuvring around obstacles and corners; with a higher speed adding significantly to the risk factor of a given manoeuvre. Vehicles in the initial release were limited to cars and motorbikes; divided up into the generic classes of Renegade and Interceptor, reflecting the vehicles of the road-gangs and the Ops respectively. Each vehicle had a number of weapon hardpoints, top speeds and maximum payload.

In May, 2019, a digital version of the game was released on Steam, under the name Dark Future: Blood Red States.