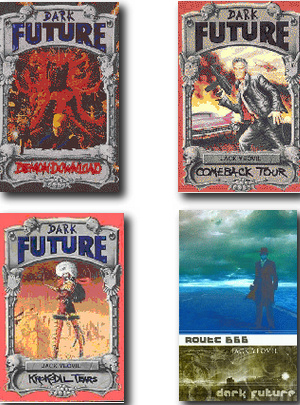 This page deals with examples from the novels by Kim Newman and the wider setting created therein.

Not to be confused with the trope, Bad Future.

Dark Future was a tabletop miniature wargame produced by Games Workshop and originally published in 1988. The game was successful enough for Games Workshop to commission a series of novels based on the setting. These started out with the short story anthology Route 666, and was relatively short-lived; the best-known and remembered being the trilogy of novels written by horror novelist and film critic Kim Newman under the pen name Jack Yeovil. These expanded significantly on the background and setting provided in the 1988 rulebook and mixed in elements from horror and played with various well-known Dystopia tropes while mixing in a healthy dose of pop-culture references, Alternate History jokes and cameos from other fictional properties. Although GW have never done anything with the game, Newman's novels (much like his Warhammer works involving Genevieve the Vampire), remained popular enough to survive beyond the lifespan of the game and have been republished by Black Library, though the final installment of his Demon Download series, United States Calvary remains unpublished.

Dark Future's setting was much the same as the tabletop game on which it was based. Newman's novels start out in 1995 and reach 1998 in Comeback Tour. Newman, King and Craig added a fair amount of flesh to the bones of the wargame's setting and background inventing personalities, characters and places to populate the desert wastelands, corporate boardrooms and urban ghettos of the setting. Newman in particular, as the most prolific writer in the Dark Future line, vastly expanded on the alternate history and events that lead to the situation that the in-game world found itself in, as well as creating series Big Bad Elder Seth and his Doomsday Cult The Church of Joseph. The end result was, as noted in the reviewer quote to the right, an anarchic blend of black humour and cyberpunk sensibilities in a universe being threatened with destruction by Cthulhu.

Works In The Dark Future Setting:

The original novelizations, published by Boxtree under the GW imprint, ran from the publication of the Route 666 anthology in 1990 to the publication of the expanded novel of the eponymous short story from the anthology in 1993. Games Workshop republished Yeovil's novels and four new Dark Future books in 2005/06 under their own Black Flame imprint.