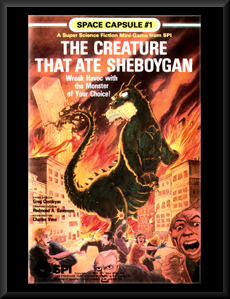 A 1979 wargame created by Greg Costikyan and published by SPI.
Advertisement:

One player takes the role of a movie monster intent on wreaking havoc on the city of Sheboygan, the other player plays the human forces (police, fire, national guard) trying to stop the monster.

This game features example of the following tropes: