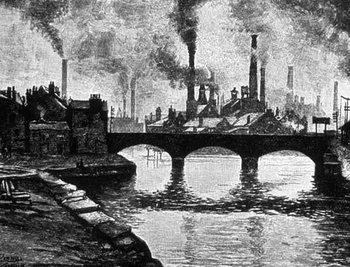 A slum district taken over or built around a nearby industrial district. The setting is often badly polluted and crippled by poverty, and/or the place is nearly all metallic due to all the leftover scrap metal and the proximity to the industrial machinery.

A protagonist might try to help the locals escape from living terribly here, but more often it simply serves as another backdrop in a Crapsack World or a more technologically advanced Empire, where there is little the protagonists can do but to move on forwards in their adventure. If this is a recurring setting in the story, it's likely the protagonist is an Anti-Hero who will commit wrongdoings to get farther ahead than the rest, even if it's only going to be slightly better for them.

Although this is often a Dystopia, it can be Truth in Television, as industrial districts were often close to where the poor lived (likely so they could get to the factories faster, also most homeowners would rather not have them in their backyard). Cyberpunk stories taking place here are going to rain.

Compare Company Town, Nightmarish Factory, and Polluted Wasteland. When these get really out of hand, they may end up part of an Industrial World.

Not to be confused with Sci Fi Ghetto.