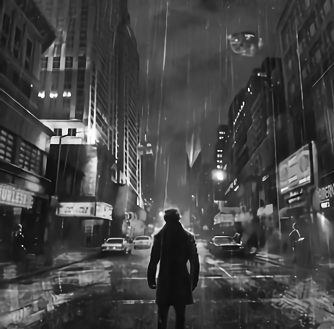 As gray as the souls that live in it.
"When the darkness fell, New York City became something else, any old Sinatra song notwithstanding. Bad things happened in the night, on the streets of that other city. Noir York City."
— Max Payne
Advertisement:

The localized, urban version of a Crapsack World. Apathetic Citizens shuffle though a maze of overbearing black skyscrapers and Sinister Subways as sirens wail constantly in the background. Expect a very limited color palette, a palpable air of decay and depression, and an unbelievable crime rate.

Usually, cities like this will consist of a downtown area full of Corrupt Corporate Executives surrounded by one giant slum.

It will often be informed by Taxi Driver-era New York (sinister clouds of steam emerging from the sewers, prostitutes on every corner, depressive Knights in Sour Armor moaning about how crappy the place is, etc.), though the origins of City Noir are actually in German Expressionism. It may take these things to surreal lengths.

If our story takes place in the future, it will be a Cyberpunk dystopia full of hideous dark Star Scrapers (symbolizing class oppression) and other signs of a future gone wrong. If it takes place in the past, the City Noir of choice will probably either be industrial revolution-era London or a fantasy counterpart version of it. Facsimiles of cities like New York and Chicago during the Great Depression might alternately pop up, although for American audiences they may well be shot through the Nostalgia Filter.

Cities Noir enjoy twenty hour nights and constant cloud cover. The remaining four hours of daylight consist of two hours of rain, one hour of thunderstorms, and one hour of sunsets. Sunrises usually mean the story is ending.

These places are a staple of Film Noir and Darker and Edgier shows.

A sister trope to Soiled City on a Hill, Vice City, Wretched Hive and Gangsterland. The Shining City is the antithesis. A Neon City may verge on a City Noir if enough of the signs are broken. See also The City Narrows and The Big Rotten Apple which is what you get when you cross City Noir with the Big Applesauce trope. See Cyberpunk with a Chance of Rain for the Cyberpunk City Noir weather forecast.

open/close all folders
Anime and Manga
Comics
Film
Literature
Fanfiction
Live-Action TV
Music
Pinball
Tabletop Games
Video Games
Visual Novels
Web Comics
Western Animation
Other
Real Life
Art
His biomechanical texture in full use at this time, we end up with towering forms in this texture, often with deep valleys between units of some giant alien machine and some... NSFW

public transport units. The Shaft series also appears to have an element of this trope; though Giger always said they came from dreams of a locked door and dark stairway in his parent's house, the darkness between towering structures is plain to see.