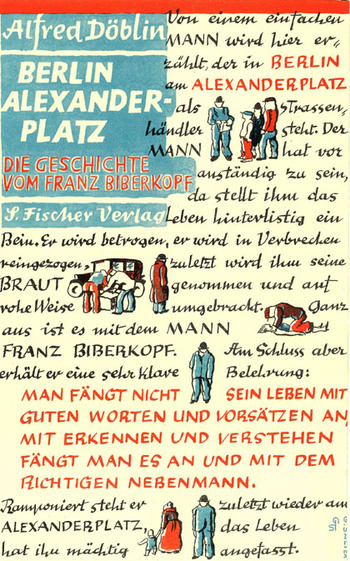 Berlin Alexanderplatz is a 1929 novel by Alfred Döblin, set in the Weimar Republic, with most of the action set in Berlin. It was translated into English, in 1931, by Eugene Jolas (a friend and patron of James Joyce).

The protagonist Franz Biberkopf is a World War I veteran turned pimp and lowlife. At the start of the story, he's released from Tegel prison for the crime of murdering his former girlfriend Ida in a fit of rage. Upon release, Franz plagued by guilt, remorse and trauma from his time in prison, resolves to be an upstanding citizen, but his love for booze, his perennially bad luck, and questionable choice of finding friends leads him on a spiral of repeating his old life. He engages in a series of picaresque adventurers with several Berliner lowlifes, undertakes a series of unfulfilling relationships, before encountering Reinhold, another cold and manipulative pimp who encroaches on Franz, as well as a prostitute named Mieze who Franz truly falls in love with.

It has subsequently been adapted to film (a 1931 film version by Piel Jutzi which was shot in the pre-war Berlin of the novel, and the actual Alexanderplatz) and most famously the 1980 miniseries by Rainer Werner Fassbinder. Fassbinder's TV-series was a 13 episode lengthy adaptation of virtually the entire novel and is remarkably faithful to the plot and characters of the text. Starring Gunther Lamprecht as Biberkopf, Gottfried John as Reinhold, Hanna Schygulla as Eva and Barbara Sukowa as Mieze. Both versions are available on The Criterion Collection.

open/close all folders
Tropes for both novel and miniseries

Tropes for the Fassbinder miniseries only 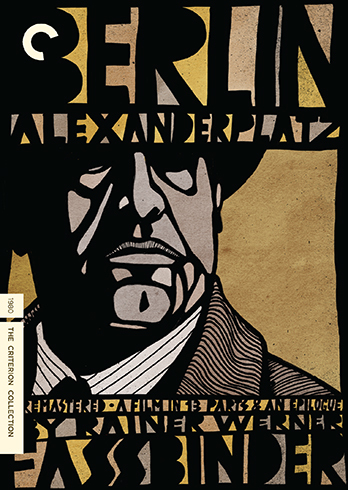