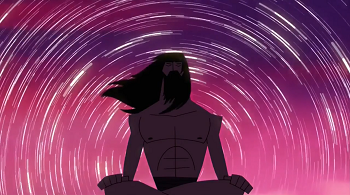 Especially prevalent in The '90s, this is when a character goes on a spiritual journey of self-discovery. The character is forced to confront his or her subconscious or seek guidance from his or her Spirit Advisors in the form of some kind of pseudo-Dream Sequence, possibly Adventures in Comaland. At times it is debatable whether the events actually take place or not. While on this journey the character may meet animal guides, dead people, ancestors, or shamans, may be forced to engage in some type of physical or mental trial, and will most likely experience a moment of revelation about him- or herself which leads to making an important life decision.

The name is taken from the "vision quest" sacrament practiced by many Native American peoples. The best known is probably the Lakotah hanbleceya which is described in Black Elk Speaks.