Film / The Tree of Life 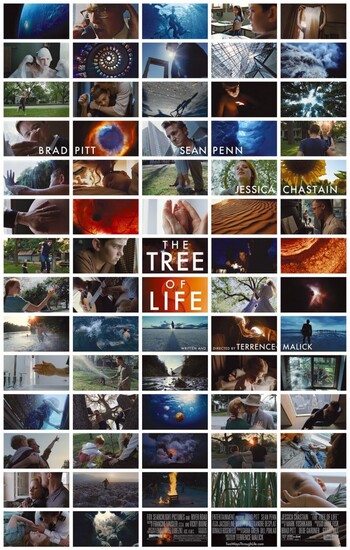 "Help each other. Love everyone. Every leaf. Every ray of light. Forgive."
"There are two ways through life: the way of nature, and the way of grace. You have to choose which one you'll follow."
— Mrs. O'Brien
Advertisement:

The Tree of Life is a 2011 art film written and directed by Terrence Malick (his fifth film overall). The film was released after a lengthy production, originating in an unfinished 1970s project and eventually being announced in 2005, missing separate 2009 and 2010 release dates before ultimately premiering at the 2011 Cannes Film Festival, where it won the Palme d'Or.

At its core, the de facto central character of the film is Jack (Sean Penn), a middle-aged man still working through scars from his rough upbringing, including an untimely tragedy. A large portion of the film recounts this upbringing by focusing on Jack's family in 1950s suburban Texas, comprised of him, his brothers R.L. and Steve, and his parents.

Jack's father, Mr. O'Brien (Brad Pitt), tries to toughen him up for the harsh realities of the world through strict discipline, while his mother, Mrs. O'Brien (Jessica Chastain), exudes love and mercy. His struggles in reconciling their contrasting worldviews are amplified by the life experiences he goes through, forcing him to confront how he processes love, suffering, death, and the loss of innocence. While the film focuses on the highs and lows of the entire family, it's Jack's coming of age that serves as a through line.

This narrative, however, is but one thread in The Tree of Life's expansive existentialist meditation, which primarily deals with the questions of humanity's place in the universe (dating back to the beginning of time) and its complicated relationship with God. This is achieved through extended sequences of abstract, nonverbal, and often Scenery Porn-filled imagery, such that many have called the film this generation's 2001: A Space Odyssey. (Apart from the similar thematic focuses, both films also feature work from visual effects artist Douglas Trumbull, who Malick had actually convinced to come out of retirement).

In late 2018, The Tree of Life was re-released by The Criterion Collection in a set containing a 4K digital restoration of the film and an extended cut with 50 extra minutes, largely composed of never-before-seen footage with new characters and scenes as well as modifications of existing scenes, music, and color grading. Malick has gone on record stating that this cut of the film should be viewed as an alternative version, and not the definitive one.