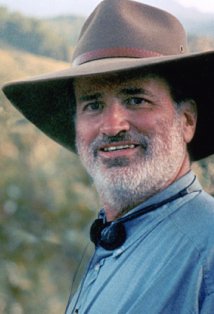 "He is quite an extraordinary guy, and I love some of his movies very much, but the problem with Terry, which I soon found, is he needs a writer desperately, because he insists on doing everything. He insists on writing, and overwriting, and overwriting, until it sounds terribly pretentious. You have to work terribly hard to make it sound real. And then he edits his films in such a way where he cuts everybody out of the story."
— Christopher Plummer
Advertisement:

Terrence Frederick Malick (born November 30, 1943) is an American filmmaker known for his idiosyncratic approach to filmmaking and film production as well as the lengthy hiatuses between his projects as well as his protectiveness over his private life.

Unlike many members of the New Hollywood generation, Malick did not choose cinema as his vocation. In Harvard, he studied philosophy, writing on Martin Heidegger, Wittgenstein, Kierkegaard and other existentialist thinkers. He later worked as a journalist for Life and New Yorker magazine, and had contributed obituaries to Robert Kennedy and Martin Luther King, Jr. He eventually did become interested in cinema, inspired by arthouse film-makers but also by silent film-masters such as F. W. Murnau. He studied film at AFI in the late-sixties (David Lynch and Paul Schrader were in the same class) and he found work as a screenwriter, before making his debut in 1973 with Badlands. This was his Breakthrough Hit, riffing on the (then) popular Outlaw Couple theme, by making a film about teenagers on a cross-country killing spree. Malick however differed with his incredibly distinct visual style, his poetic approach to narrative, use of landscape and groundbreaking cinematography and production design. In Malick's films, the style matters far more than the stories. Malick followed that up in 1978 with Days of Heaven, an evocative, dream-like portrait of a wheat farm in the early 20th century America. The film became iconic for its use of "magic hour" cinematography and natural lighting, i.e. using the actual sunlight and dim natural settings rather than studio lights.note Extremely difficult to achieve at the time on film cameras owing to (then) film stock's limited capacities at recording light, with Malick and cinematographer Nestor Almendros more or less showing people that the stock could do stuff they didn't know was possible

He then took a twenty-year break from the film industry without directing a single movie in the 1980's, spending a great deal of time in Paris and traveling. During that time he was rumored to have projects in the works, but nothing materialized until the late 1990s when he went into production on The Thin Red Line, an adaptation of James Jones's novel about the battle of Guadalcanal. This twenty-year absence is the true source of Malick's reputation as a reclusive artist, although friends note that it's because the film-maker is genuinely shy and not comfortable being a celebrity. Malick always maintained good relations with studios and producers

, and being independently wealthy, he did not really need to direct for a living and his hiatus was self-imposed rather than any opposition to studios. Critics and audiences didn't know quite what to make of it when it was released (it didn't help that it was released the same time as the more mainstream Saving Private Ryan), but it was nominated for seven Academy Awards, including two for Malick, as Best Director and for his screenplay.

For a while it looked as if Malick might be going back into hibernation, but he returned seven years later in 2005 with The New World, a portrait of John Smith and Pocahontas. Like The Thin Red Line before it, The New World baffled audiences and critics when it was initially released, but has since been acclaimed by critics as one of the best films of the 2000s. Six years later, Malick released his fifth film, The Tree of Life, a film about three boys growing up in 1950s Texas, which featured a much-discussed sequence involving the creation of the universe. It was met with critical acclaim on its release, and won the Palme d'Or at the Cannes Film Festival. The Tree of Life is the turning point in Malick's career in that it marked the start of his current and most prolific phase. Between 1970-2009, he had made four features. Between 2010-2017 he put out five films, outmatching his former output in less than a decade. Of course given the uncertain nature of independent film-making and Malick's history of dropping off the radar, no one can be sure how long this will last. He has also become a more public figure, appearing at film festivals and giving interviews, when before he had a reputation for being more aloof than Stanley Kubrick.