Visions of Another Self 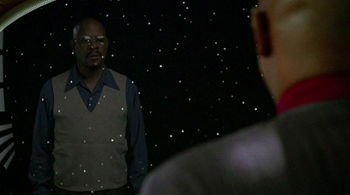 Occasionally Visions of Another Self occur by having a character actually travel to a place, whether it's in the actual past, an Alternate Universe or a Mirror Universe. Just as, if not more often though, it will be a constructed fantasy, a dream, a hallucination, a flashback (or someone else's flashback), a holodeck experience or the fantasy equivalent thereof, part of a Vision Quest or just a very active imagination. The probability of one of these occurring increases dramatically if Reincarnation is involved. Other times, this is done without the present-day characters even being aware of the past, but the writers playing up the parallels between the two for the audience's benefit.

Sort-of-but-not-really related to Pensieve Flashback. Superficially resembles an ad hoc Universal-Adaptor Cast. If the character having these dreams starts to think that they are the true reality and the rest of the show is the dream, it's a Cuckoo Nest. See also But You Were There, and You, and You.