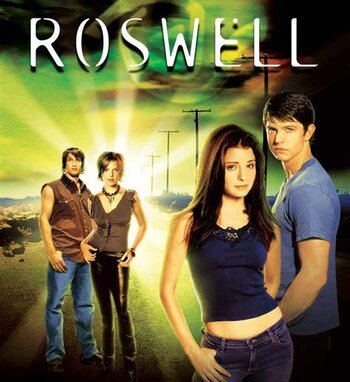 Roswell (1999-2002) was a short-lived Science Fiction series that debuted on The WB network in 1999. It was moved to UPN in 2001 in a package deal with Buffy the Vampire Slayer, and completed a run of three seasons.
Advertisement:

The series was a combination of a Science Fiction/Monster of the Week show and a romantic Teen Drama.

The three main characters, Max, Isabel and Michael, are Antarian survivors of the Roswell UFO crash, and were adopted by human families. Though Max and Isabel were raised in a privileged, loving family, Michael was raised in a trailer with his abusive foster father. Though the three successfully isolate themselves from the rest of their classmates through high school, their plan is disrupted when Max saves the life of a girl named Liz Parker using his alien superpowers. Liz's sidekicky friends Maria and Alex add the comedy to this otherwise broody and dramatic lot.

Based on the YA novel series, Roswell High. Often considered to have set the stage for Smallville, which uses a lot of the same themes, but with DCU characters. Not to be confused with Roswell Conspiracies: Aliens, Myths and Legends. A continuity reboot and second adaptation of the books, titled Roswell, New Mexico, premiered on The CW in 2019.