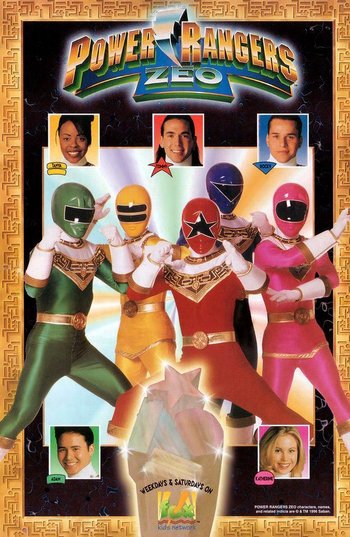 Power Rangers Zeo is the fourth season of Power Rangers and a direct sequel to Mighty Morphin' Power Rangers, adapted from Chouriki Sentai Ohranger. After the cliffhanger that ended the Mighty Morphin Alien Rangers arc, Rita and Zedd are busy celebrating their victory, only to flee for their lives due to the invading Machine Empire, who want to gut Earth of its natural resources. Meanwhile, the Rangers have seemingly hit rock-bottom after the destruction of the Command Center and the loss of their powers. But thankfully, they find the incredibly-powerful Zeo Crystal amid the rubble; shortly after, they discover a new hidden base beneath the surface of the original. Zordon reveals that he and Alpha have survived, and to combat the threat of the Machine Empire, tap the Zeo Crystal to provide the team with all-new powers, including for the first time brand-spankin' new uniforms for the entire team.

Zeo is largely where the franchise began to grow up, by introducing a few season-spanning plot threads, becoming slightly less preachy, with charity work and environmentalism becoming less common plot elements and much more character-driven. Billy Cranston, the last original Power Ranger, retired from active duty to act in a tech support and Mission Control role, as well as serving as a mentor to the newer rangers under Zordon. Newer characters such as Katherine Hillard and Tanya Sloan, and even Rocky DeSantos and Adam Park, were allowed to grow beyond their Suspiciously Similar Substitute beginnings. Even Farkus "Bulk" Bulkmeier and Eugene "Skull" Skullovitch managed some Character Development after going through police training and later becoming private detectives. The show also reintroduced Jason Lee Scott, the original Red Ranger, to return and take up the role of their Sixth Ranger.

Zedd and Rita were also not quite out of the picture, as they worked to reclaim their status as the series villains and sometimes their guerrilla strikes against the Machine Empire ended up helping the Rangers. It is one of the more popular seasons, as it had classic characters, an epic scope and decent writing. It also set up the concept of the Ranger changing powers and costumes once a year, and further established more Rangers trading in and out. Some also consider it to be in some ways better than the original seasons in terms of quality, with a greater focus on character development and more dramatic moments. In other words, Zeo had some big shoes to fill, and they were filled well.

Unfortunately, ratings that had begun to decline in season 3 dropped even further in Zeo, which lead to a harder cut-off to Zeo than expected. This season ends with the Machine Empire compromised but not destroyed and Lord Zedd declaring "We're back!" plotting their return. When Turbo: A Power Rangers Movie came out the Machine Empire is not mentioned, Zedd and Rita only have a cameo (but implied they are not fighting the Rangers anymore) and the Zeo powers, weapons and zords are dropped entirely in favor of the Turbo powers and subsequent gear.

The infamous fan hoax "Scorpion Rain" was an attempt to bridge this gap, it was Fan Fiction claiming to be a multi-part Missing Episode featuring Rita and Zedd versus the Machine Empire on the moon and Serpentera ends up buried. The story was placed retroactively into continuity with the Power Rangers Wild Force episode "Forever Red", although only in Broad Strokes. Word of God regarding Zedd and Rita is they took a honeymoon to raise their child Thrax, who appears in Power Rangers Operation Overdrive.