Married in the Future 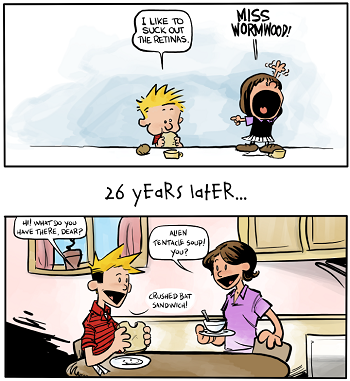 You've all seen it. It's the Alternate Universe episode, there's a flashforward, or we're rejoining the characters after a sizable amount of time has passed. Two characters who were previously only dating, were just friends, hadn't met yet or even hated each other's guts are now happily settled. For one reason or another it's not enough to demonstrate that they're involved in a stable relationship; the fact needs to be established that they are married. This is almost always achieved through an awkward aside, which generally goes along the lines of "That's why I / you married you / me", "You shouldn't have married me", etc. Very occasionally used without dialogue by including an otherwise gratuitous shot of a wedding photo.

This is a spoiler-heavy trope. Expect unmarked spoilers ahead.