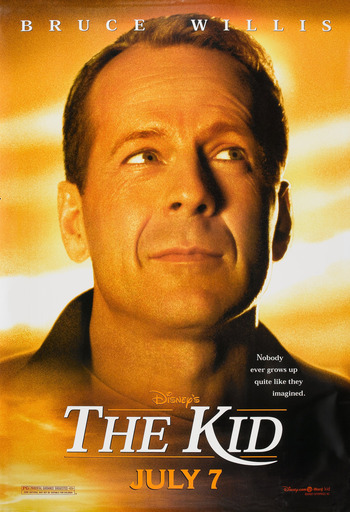 "All I see when I look at him is a collection of awful memories. Memories I spent most of my adult life trying to forget."
"So let me get this straight. I'm forty, I'm not married, I don't fly jets, and I don't have a dog? ...I grow up to be a loser."
— Rusty Duritz
Advertisement:

40-year-old Russ Duritz is a successful image consultant with a variety of clients ranging from TV personalities, to famous athletes to government officials. He has a nice car, a large house, everything you could ask for…except a life. He's also a bit of a jerk.

One day he finds a kid who somehow got into his house and makes a startling discovery. This kid is Rusty Duritz, himself at age 8. Now he has to figure out what to do with…himself while starting to remember a few things that he had forgotten about himself.

Not to be confused with The Kid (1921), which stars Charlie Chaplin.

The Kid contains examples of:

"What happens next between being me and becoming you?"