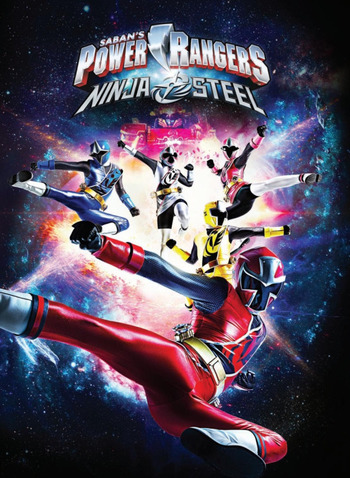 The Ninja Nexus Prism is a mystical object, covered in powerful Ninja Steel and containing the awesome Ninja Power Star. One day it landed on Earth at the home of a ninja master and his two sons. Soon it was followed by the evil Galvanax and his henchmen. The ninja master sent one son into hiding with the Ninja Steel, and used the Power Star to become a Power Ranger and defend his other child. Though it was not enough and he was seemingly killed in the fight, he was able to split the Star into six individual pieces which retreated back into the prism, protected from Galvanax. Not wanting to leave empty handed, Galvanax took the now-inaccessible prism and the young child back to his spaceship.

Ten years later and Galvanax is running the most popular intergalactic game show in the universe, Galaxy Warriors, where monsters battle each other to prove their might and hope to earn a chance to retrieve a Power Star from the Prism—so far to no avail. Meanwhile, the child Brody has grown into a formidable ninja despite being a prisoner on the ship. When Brody overhears Galvanax's plans to return to Earth and claim the Ninja Steel in the hopes of forging his own Power Star, he and his fellow prisoners escape with the Prism itself. On Earth he and four other worthy teens are able to claim the the Power Stars from the Prism and become the Power Rangers Ninja Steel, who now must fight off the Galaxy Warrior contestants that Galvanax sends after them as he broadcasts them across the universe.

It was the final Power Rangers series to be produced by Saban Brands, as Hasbro brought the license from them in 2018. As such, Ninja Steel was succeeded by Power Rangers: Beast Morphers, the first series under their banner.