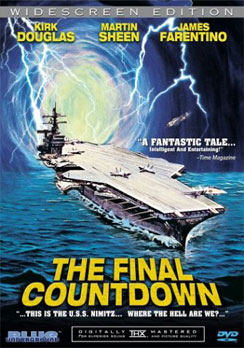 Sending the USS Nimitz back to 1941, that's the kind of teleportation we're talking about.
Advertisement:

When a very large number of people, a whole fleet, an entire city, or even a whole planet, is sent to another place, another time, or another dimensional plane.

A Mass Teleportation through time is more specifically referred to as an ISOT (acronym for Island in the Sea of Time, a novel by S.M. Stirling in which the entire island of Nantucket is teleported back to the Bronze Age).

The phenomenon may be deliberate, but is usually accidental, unexplainable, or the work of an Alien Space Bat. When an ISOT takes place on a small scale, it's a different trope (e.g. Trapped in the Past).

A subcategory of Teleportation Tropes.

The planet Gallifrey is teleported through time and space right next to Earth.

The planet Gallifrey is teleported through time and space right next to Earth.