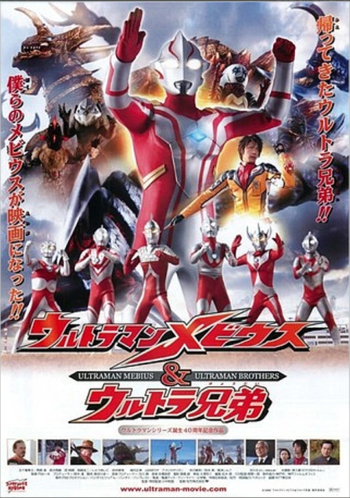 "We were born from darkness, and taint everything with it. Ultra Brothers, this time I will surely destroy your light!" - Yapool
Advertisement:

Twenty years in the past, a mighty battle took place in the stratosphere where the four Ultra Brothers - Ultraman, Ultraseven, Ultraman Jack and Ultraman Ace battled against the mighty Yapool, the great interdimensional demon-lord and one of the most powerful enemies of the Ultra Brothers, whose powers fueled by sheer hatred has allowed it to fuse into the ultimate monster, Ultra-Killersaurus. While victorious, the Ultra Brothers were unable to destroy Yapool or U-Killersaurus completely, and ultimately managed to seal Yapool in Kobe Harbour, at the cost of their powers. And from then onwards, the Ultra Brothers - Shin Hayata, Dan Moroboshi, Hideki Goh, and Hokuto Seiji, led peaceful, civilian lives in the city of Kobe, while hoping to return home someday.

At present, Mirai Hibino, the human form of the current Ultra stationed on Earth, Ultraman Mebius, managed to meet the four original Ultra brothers, whom he idolized since a trainee in Ultraman academy, having heard of their exploits from his teacher, Ultraman Taro. But a greater threat looms ahead as four sinister aliens whom are the sworn enemies of the Ultra Brothers - Zarab, Nackle, Guts and Temperor, have forged an alliance to undo the seal that is keeping Yapool entombed in the Port of Kobe...

With an alliance of the series' greatest foes, it is up to Mebius to prove himself to the heroes of the past, his worthiness as a protector of Earth, and to save us all from a threat greater than anyone could imagine...

Ultraman Mebius And The Ultra Brothers provides examples of the following tropes:

"Commrade? Don't make me laugh. He was nothing but a mere sacrificial pawn." - Yapool