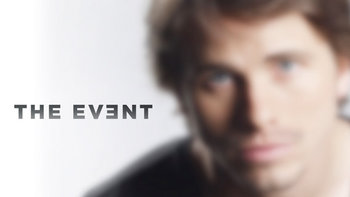 This guy staring at you is definitely not The Event.
Advertisement:

A commercial airliner hijacking. The discovery of a secret CIA prison deep within the mountains of Alaska, whose prisoners apparently aren't human. A presidential press conference that could put the national security of the United States at risk. The mysterious disappearance of a young woman aboard a crowded cruise ship.

None of these incidents are "The Event".note Nor are they The EV3NT.

The Event is a drama/science fiction TV series by executive producer Evan Katz (24). Told in anachronic order, the series tells the stories of several seemingly unrelated people whose lives intertwine as circumstances propel them toward some mysterious future happening known only as "the Event". The show premiered in the United States in 2010 on NBC, and stars Jason Ritter, Blair Underwood and Laura Innes.

The series premiered very strongly, but ratings dropped steadily throughout its run, and it was announced as cancelled on May 13, 2011.

The Event provides examples of the following: