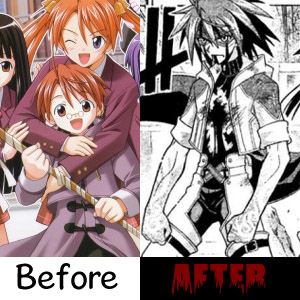 Wait a minute, wasn't this supposed to be a harem comedy? I-is that the same little boy?!
[a montage of people driving in cars]
Narrator: I am your permit, your license, your permission to drive. I am a privilege, and an obligation... Your obligation to drive skillfully, carefully, and legally.
[someone suddenly gets into a car crash, with quick cuts to up-close shots of innocent bystanders reacting, before settling on a long shot of a traffic light in a fog of smoke]
Josh Way: Suddenly, Fritz Lang's directing! ...[sigh] It's no time to get arty, movie.
— "Fun With Shorts: Your Permit to Drive"

Controversial or extremely different ideas are very hard to get past sponsors and audiences suspicious of anything new and unfamiliar. An easy if sneaky way around this is merely to present the beginning of the story as something familiar. However, once the main plot kicks in, your audience is hopefully loyal enough not to notice the quick shift in tone and pacing. If you did it well, in hindsight they might notice little hints you dropped about what was to come. As a side effect, the story will probably also undergo Mood Whiplash.

Genre Shifts sometimes occur at the ends of a series when the writers finally get around to soapboxing their opinions. Many fluffy, over-the-top comedies will suddenly find their last episode making an attempt at drama. On the other hand, some cutesy or romance-based stories can experience Genre Shift simply because they start running so long the writer figured if they have to derail the original plot, they might as well do it with something creative.

It is possible for this to work, as long as the creators know what they're doing, and it can pay off quite well at times. Usually, however, this requires planning it from the start, allowing the Writers to set it up ahead of time so it doesn't feel like it comes out of nowhere. Because of their sudden onset, Genre Shifts motivated by Executive Meddling are likely doomed.

Even worse is if a genre shift is used as the solution to a plot point, which just feels tacky.

If this happens only once in a series before reverting back to the main genre, it's an Out-of-Genre Experience. If it happens before the work is released to the public, it's a case of Mid-Development Genre Shift. If it suddenly ends up being a horror story, possibly even a Cosmic Horror Story, without much foreshadowing, that’s Surprise Creepy and Cosmic Horror Reveal. If it happens during one specific installment (such as an episode of a series), then it's a Halfway Plot Switch. In the middle of a song, it can be Song Style Shift.

Not to be confused with Art Shift, Genre Roulette or Genre Turning Point. Compare with Tone Shift, where the tone is what changes, and Cerebus Syndrome, where the story/series becomes more dramatic over time.