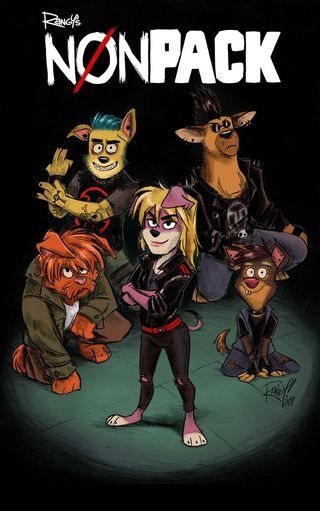 Standing in the center: Karen. Surrounding her, clockwise from bottom left: Doc, Yuki, Tebo and Shara.
"Street-savvy Karen dreams of being Rich Port's top bad dog, but she will have to prove her bite is as good as her bark to lead the pack"
—The comic's description at its Kickstarter page

is a Furry Webcomic written and illustrated by Rangely “Rangy” García with heavy themes of action, drama, and Dark Humor.

NonPack follows the life of Karen, a stray anthropomorphic dog who lives in a fictionalized version of Puerto Rico called Rich Port. She leads a gang of criminals called “Los Satos”, or The Satos if you speak English (but never The Los Satos).

The first arc focuses on Karen; she aspires to be Rich Port's top dog in the criminal world, so to speak, but she'll have to watch her back and figure out how to make the Satos their own thing rather than Marcel's lapdogs, and there are numerous other gangs hungering for control over Rich Port.

NonPack has the following tropes: