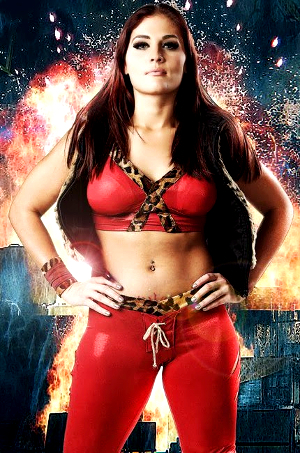 Ivelisse Milagro Vélez (born September 21, 1987) is a professional wrestler in North America, originating from San Juan, Puerto Rico. She trained under, Quique Cruz, Carlos Colon and Savio Vega in Puerto Rico, before working her way up the Chicago indies under the name Juliette The Huntress. Juliette would then wrestle for Colon's World Wrestling Council and Vega's International Wrestling Association in Puerto Rico, up until she joined New Wrestling Star and aided its wrestlers, along with those from New Empire, in an invasion of WWC. Later she won the Pro Championship Wrestling Women's title and Vanguard Wrestling All-Star Alliance Women's title in the continental United States.

She achieved a huge boost in fame when she was one of the contestants on the revival of WWE's Tough Enough. During the contest she suffered a serious knee injury and was eliminated two weeks later.

Despite her elimination, she impressed WWE officials and was signed to developmental contract in 2011. She competed in WWE's FCW revival and NXT as Sofia Cortez. However she was abruptly released in mid-2012 for supposed "attitude problems"note later revealed to have been refusing head trainer Bill DeMott's advances - this came to light after the DeMott bullying scandal broke in the spring of 2015. Still, enjoying the boost in fame from her time in WWE, she remained a regular fixture on the independents and trained with Franco Lozano for a possible debut in mixed martial arts before briefly returning to national scene by way of TNA's Gut Check competition (being passed over in favour of Lei'D Tapa) and One Night Only shows. Ivelisse did not stop winning titles either, having the Pro Wrestling Revolution Women's title, SHINE title belt, Family Wrestling Entertainment Women's Championship belt and the Women's Title of Chilean enterprise Wrestling Superstar to her name. Vélez's third stint on national TV started with her debut for Robert Rodriguez's Lucha Underground, which distinguished itself from immediate television competitors by regularly showcasing inter gender matches. She would highlight this by winning its trios title with two male partners. She'd also win the World Wrestling League Diosas Title back in Puerto Rico, SHINE's Tag Team Titles with Mercedes Martinez, medals from All Elite Wrestling's Tag Team Cup with Diamante, the Ladies Night Out Title for Title Match Network, the Southwest Wrestling Entertainment Fury Women's title and BellaDonna Division's Forbidden Elegance Title belt.