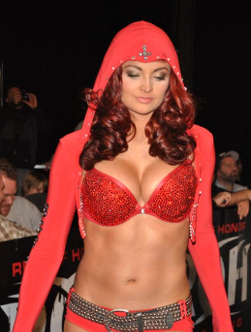 She's at the top of her game!
Maria Kanellis (officially Mary Louise Kanellis-Bennett, née Mary Louise Kanellis, born February 25, 1982) is an American professional wrestler and manager, as well as a model, singer, and occasional actress. Initially best known for her time with WWE, she later became a mainstay with both Ring of Honor and the New York-based Family Wrestling Entertainment alongside her real-life husband Michael Bennett.
Advertisement:

After regularly competing in beauty pageants, the Chicago native entered the WWE Diva Search in 2004, and while she didn't win the competition, she made enough of an impression that WWE decided to sign her and give her the gimmick of a ditzy interviewer who often verbally walked into insults and innuendos, though occasionally showed Hidden Depths of intelligence underneath the persona. Eventually her character expanded beyond this and she became a competent valet and wrestler, though she was released in early 2010 before she could first taste tangible success.

21 months later, in December 2011, she debuted at ROH as the valet for Mike Bennett, her boyfriend at the time and eventual husband. Two months after that, she debuted at FWE. She became a regular at FWE shows and one of the cornerstones of the fledgling New York promotion's female division, and is the only two-time FWE Women's Champion, first as the inaugural champion, then the longest-reigning. Initially, her character was largely the same as it was in WWE, however that would change with time as she gradually became a confident, powerful, conniving heel, both as Bennett's manager and as FWE's #1 female. In ROH, she and Bennett eventually formed an alliance with Adam Cole, creating the Power Stable known as The Kingdom.

After years of success, Mike and Maria both moved onto TNA at the start of 2016.

She returned to WWE (and Mike came with her) in June of 2017, though they made scarce appearances due to Maria becoming pregnant by Mike twice while under contract. She is a one-time 24/7 Champion. Both were let go in April 2020, before returning to ROH.