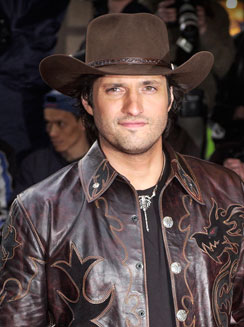 "I think that logo probably cost more than my entire movie."
— Describing the Columbia Pictures Vanity Plate in the commentary to El Mariachi
Advertisement:

Easy. He's that hard-edged filmmaker who directed the El Mariachi trilogy, Machete, From Dusk Till Dawn, Sin City and half of Grindhouse.

No, wait! He's that family-friendly guy who gave us the Spy Kids tetralogy, The Adventures of Sharkboy and Lavagirl, and The Book of Boba Fett.

Whoever he is, he does most of the work on his films, directing, screenwriting, editing, composing, production designing and just about everything else aside from being the actual cameraman. No, wait, he does that too. He's also very proud to be Mexican, as most of his movies can attest.

His diaries from the shooting of El Mariachi were published as Rebel Without A Crew, a book which is absolute required reading for all aspiring indie/low budget filmmakers.

He and fellow director Quentin Tarantino have worked together on a couple of each other's projects, their biggest collaboration being Grindhouse.

Danny Trejo has been in numerous films of his and the two of them also happen to be cousins—but there's no Nepotism involved. In fact, the two of them didn't even learn that they were related until after the filming for Desperadonote Which was released on August 25th of 1995 had wrapped up.

Rodriguez is the founder of the El Rey Network, an American television network co-owned by Univision which specializes in classic grindhouse-style cinema and shows, as well as the co-creator of the professional wrestling promotion and El Rey original series of the same name, Lucha Underground, which sports talent from famed Mexican promotion AAA.

See also Hybride Technologies, the VFX firm that Rodriguez works with in most of his films.