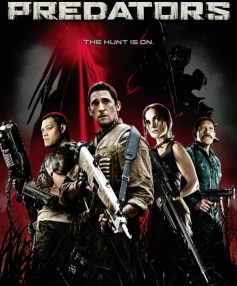 Fear is reborn...
"It wants us to run. That's how it hunts. This is its jungle, its game, its rules."
— Royce
Advertisement:

Predators is an action film released in 2010. It is the third installment in the Predator franchise, ignoring the Alien vs. Predator films.

An American mercenary, Royce, wakes to find himself free falling toward a jungle below, with no clue why he's hurtling towards the ground at an alarming rate, or why there's a parachute on him that deploys automatically. Soon after landing, he encounters others who have arrived the exact same way. All they have in common is that each is a deadly killer and they band together for strength in numbers. Soon they realize that not only are they not in Kansas anymore, they're on a gigantic game reserve....

Robert Rodriguez had put together a script for the film way back in 1994 before Fox finally greenlit the project 16 years later. Directed by Nimród Antal, it stars Adrien Brody, Topher Grace, Alice Braga, Laurence Fishburne, Walton Goggins, Louis Ozawa Changchien, Mahershala Ali, Oleg Taktarov & Danny Trejo. It was co-produced out of 20th Century Fox by Robert Rodriguez, who is frequently misidentified as the director.