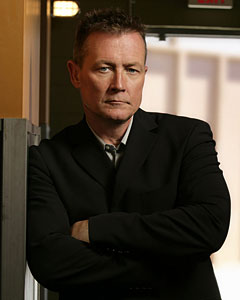 "You can't think about how people will perceive you or your character. All you can do is focus on your work. The rest is up to the universe. I've been acting for 16 years. I've done 55 movies and, in all seriousness, there's maybe five that are good and the rest are crap."
Advertisement:

Robert Hammond Patrick, Jr. (born November 5, 1958 in Marietta, Georgia) is an American actor. He is well known for his work in the Science Fiction genre, and is a Saturn Award winner.

Born in Marietta, Georgia, he was raised in Columbus, Ohio. He is the eldest of 5 children. One of his siblings is Richard Patrick, former Nine Inch Nails guitarist and current lead singer of bands Filter and Army of Anyone.

He dropped out of college when drama class sparked his interest in acting, receiving his first professional acting job in the 1986 TV film Eye of the Eagle. Since then, he went on to appear in supporting roles in various films and television series.

He is described as someone who has "developed a solid reputation within the industry", with critics, fans, and co-stars alike praising his "work ethic, personality, and consistent performances".