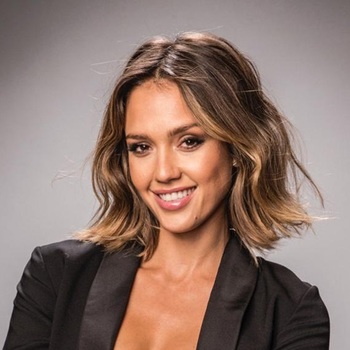 Jessica Marie Alba (born April 28, 1981 in Pomona, California) is an American actor. She is of Mexican and Danish descent. She started her acting career in the '90s, playing in a few independent films, making a few appearances on The Secret World of Alex Mack, and doing a couple of seasons of the revived Flipper series. Then she grew up and starred in Dark Angel. And then she played a stripper in Sin City, and Invisible Woman in Fantastic Four (2005), and wore a bikini in Into the Blue. She has a personal code about never appearing nude. At least not completely.

She married Cash Warren in 2008, with whom she has two daughters, Honor and Haven, and a son, Hayes. (Yes, all of their names start with H.) In recent years she's devoted more time to motherhood than acting, starting a company called The Honest Company (specialising in non-toxic household goods) and authoring The Honest Life, a book about this lifestyle. The company became highly successful, and Alba's net worth is estimated to be $340 million.

Despite looking entirely different and both having been in Valentine's Day (although never in the same scene), not to be confused with Jessica Biel.