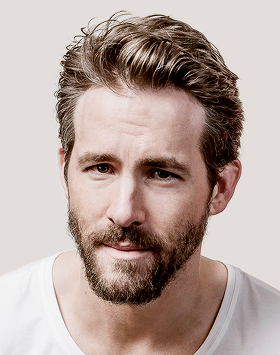 God's perfect idiot.
"Acting has given me a way to channel my angst. I feel like an overweight, pimply faced kid a lot of the time - and finding a way to access that insecurity, and put it toward something creative is incredibly rewarding. I feel very lucky."
Advertisement:

Ryan Rodney Reynolds (born October 23, 1976) is a Canadian-American actor with dual trademarks of adept comic timing and weirdly charming cockiness. His performance as the eponymous Van Wilder made him a big star, as well as typecast him. Later, he got to branch out in big films as Wade Wilson/Deadpool in X-Men Origins: Wolverine and Hal Jordan in the Green Lantern (2011) film. He starred as Wade Wilson/Deadpool again (in Truer to the Text fashion) in the Deadpool movies, which wouldn't have happened without his personal determination. He's set to continue playing the character even after the X-Men film franchise was absorbed and rebooted into the Marvel Cinematic Universe. In his lesser known work, he's also proven himself an exceedingly fine dramatic actor who can turn off the familiar sardonic persona. He was named one of the sexiest men alive in an issue of People magazine.

He was previously married to Scarlett Johansson and later married Blake Lively, with whom he has three daughters.

that may serve as proof that he actually IS Deadpool.

As it turns out, he is also an amazing pitchman, which started after he bought a gin label called Aviation Gin and decided to continue his Deadpool-like shenanigans by taking it upon himself to advertise it personally. He's done the same for Mint Mobile, after acquiring an ownership stake in that company, even getting Rick Moranis out of retirement to appear in an advertisement. Other companies he promotes includes dating website Match.com, Highkey (a line of sugarless snacks), and Peloton (after he humiliated the company over its "The Gift That Gives Back" ad).

, through which he produces his more recent projects and campaigns, as well as the short-lived ABC game show Don't, for which he also served as The Announcer. Outside of acting, he and Rob McElhenney are the owners of Wrexham AFC, a Welsh football/soccer club that currently plays in England's National League, the highest level of the latter country's non-leaguenote (i.e., outside the Premier League and the three-level English Football League) football.