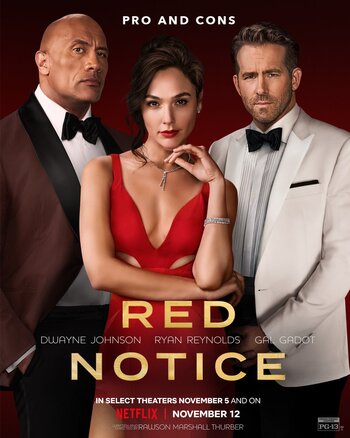 "There's one last thing you should know: trusting a thief can be dangerous."
RED NOTICE (noun): The highest level of arrest warrant issued by The International Criminal Police Organization (INTERPOL). Reserved for the world's most wanted criminals.
Advertisement:

An Interpol-issued red notice is a global alert to hunt and capture the world's most wanted. FBI Profiler John Hartley (Johnson) is on the trail of art thief Nolan Booth (Reynolds), who is trying to acquire three golden eggs once owned by Queen Cleopatra. He succeeds in tracking Booth down thanks to information provided by a rival art thief, Sarah "Bishop" Black (Gadot), but after Booth is captured in possession of the first egg, Bishop steals the egg from police custody and frames Hartley for the crime. Arrested and thrown into the same prison as Booth, Hartley is forced to work with the man he just arrested in order to get to the remaining eggs before Bishop does, capture her, and clear his name.

Originally produced by Universal and Legendary Pictures for a theatrical release, the film was released on Netflix on November 12, 2021. Like several of Netflix's other 2021 releases, it had a limited theatrical run in AMC theaters starting on November 5. Two sequels are in development.

Not to be confused with SAS: Rise of the Black Swan, which is known as SAS: Red Notice everywhere except Netflix, which changed the name to avoid confusion with this movie, which was in production at the time it acquired the streaming rights for the other film.