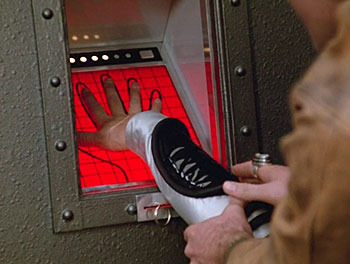 "Thanks for lending me a hand there, mate."
Kryten: Logically, sir, there is only one way you could possibly have opened that door. I feel quite nauseous. — Where is it?
Lister: Where's what?
Kryten: [horrified] Oh, sir, you've got it in your jacket!
Lister: I got us out of the hold, didn't I?
Kryten: Sir, you are sick! You are a sick, sick person! How can you possibly even conceive of such an idea?
Lister: Hey, shut up... or I'll beat you to death with the wet end.
Kryten: Sir, if mechanoids could barf, I'd be onto my fifth bag by now...
— Red Dwarf, "The Inquisitor"
Advertisement:

Once upon a time, infiltrating a base was pretty easy: just knock the guards out, take the keys, and get in. Fortunately, modern high-tech facilities, or in The Future have more cunning devices, and can identify the guards by unique biological features, such as handprints or retinal scans. These cunning devices are reliable, efficient, and not prone to believing just anyone who happens to be wearing the right uniform. Great, huh?

Unfortunately, the more dangerous individual won't need to get your guards to agree: He'll find someone with the right access and engage in some very unpleasant surgery. He may remove a guard's eye or finger, or he may simply lop off his or her head and hand with a big ol' blade. Then, equipped with those body parts, he'll simply apply these to the biometric authentication device in question and get through.

This raises the question of whether or not any such devices would be able to tell whether the hand or eye in question was attached to a living body. In reality, this actually is a key consideration in designing biometric security. Some devices (the cheaper ones, mostly) are vulnerable to this kind of thing. Needless to say, such a weakness is considered an absolute disqualification for usage in any classified government facility.

The violent means is rarely used by good guys unless they're Late to the Tragedy and there's already a surplus of corpses, as it's definitely on the morally dubious side of things, even if you don't kill the victim. A more moral person may have to talk or threaten the guard into showing his "Eye-D", or simply wrestle the poor mook into place. However, one way to bypass the identification system without violence is to simply lift fingerprints left on an object or acquire shed materials such as the target's hair. Another option is to wiretap the biometric sensor so that the signal from an authorized subject can be recorded and used later in a replay attack

. Such tactics are among a Master of Unlocking's arsenal for getting past locked doors.

Note that this is not about bypassing biometric scanners in general. This is about using the body parts of those who have access to bypass the scanners.