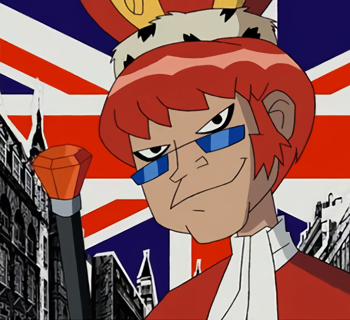 He uses mind control to take over the city, invades it with British pop culture, and makes everyone say "biscuits" instead of "cookies".
Ben Kingsley: Have you ever noticed how, in Hollywood movies, all the villains are played by Brits?
Mark Strong: Maybe we just sound right.
Tom Hiddleston: [flying in an open helicopter without spilling a drop of his tea] We're more focused. More precise.
Strong: We're always one step ahead.
Kingsley: With a certain style; an eye for detail.
Hiddleston: And we're obsessed by power! A stiff upper lip is key.
Strong: And we all drive Jaguars.
Kingsley: Ohhh yes. It's good to be bad.
— Jaguar 2014 Super Bowl commercial: "British Villains"

Any character with a British accent, particularly in upper class Received Pronunciation (far and away the most common type you'll hear in American media) is likely to turn out to be a villain. The English tend to view this trope in one of three ways, depending on the particular depiction. Either: with a sense of pride (Evil Is Sexy / Evil Is Cool / Evil Is Posh after all!), mild eye-rolling amusement (tsk, Americans) OR annoyance at the apparent national stereotyping.

The exact origin of this trope is unknown, but American examples of it probably have roots in nationalistic pride given the United States' world-famous origin story: The American Revolution. Ergo, American accent = good, British accent = bad.

This includes all evil characters with British accents (where the rest of the cast has accents), whether or not they are actually stated to be British. Quite a few of these are not actual Brits but have anomalous quasi-British (usually vaguely upper-class and English, as noted above) accents in settings where almost everyone else has some sort of American accent and no one is necessarily supposed to be from either country, just to mark that character as villainous. As you might expect, this version appears to be associated with films and shows in which the use of English is (at least weakly implied to be) a Translation Convention for whatever the characters are "really" saying, although it's not exclusive to them. See The Queen's Latin and Aliens of London, when British accents (especially Received Pronunciation) are used for non-British characters.

Villains of this type come in two flavours. The first is usually wealthy and snobbish, and probably quite well educated. The second is the hooligan with the Cockney (or similar) accent.

This is fairly recent since during Hollywood's Golden Age it was acceptable for the good guys to speak with an upper-class English accent as well.

Probably related to The Mean Brit, although it appeared well before the Mean Brit trend began. The Romans, who generally are the baddies in most historical films, are almost always played by English actors. The British also are often the imperial bad guys in Hong Kong kung-fu flicks and other Asian series. World War II films using the Translation Convention usually have Nazis played by Brits as well. Surprisingly, they are quite rare in Irish films.

In Hollywood at least, this may be a product of different acting traditions. Simplifying wildly, Americans go into movie acting to be rich, famous, and loved by the audience; Brits go into acting because they like acting, and some who do well at it then go to Hollywood for the money. With, on average, more training, more experience, less need to be loved, and a cheerful interest in any well-paying gig, they can often make excellent charismatic villains. Of course, it seems that there are also people in Hollywood with a cultural aversion to Britain who are all too happy to cast them in these parts.

Given the way in which American fans often respond to British accents, fandoms sometimes turn this sort of character into Draco in Leather Pants. In non-Western eyes, expect most evil British characters to have white hair.

Contrast British Stuffiness, which may be applied to a nominally heroic character who must nevertheless Die for Our Ship.

Doesn't really apply in British works, of course. In those, this role is often given to the French, Germans, people from the Balkans or (rarely, especially nowadays) Americans.

See also I Am Very British.

The only scientist to speak with an upper-class English accent, and he's certainly evil. This goes to his female counterpart.

The only scientist to speak with an upper-class English accent, and he's certainly evil. This goes to his female counterpart.