Film / Anacondas: The Hunt for the Blood Orchid 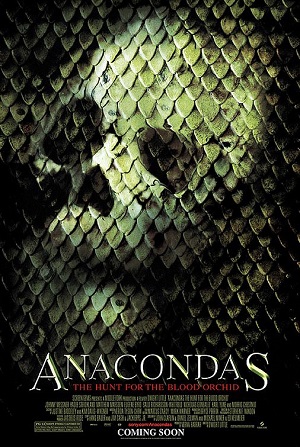 Anacondas: The Hunt For The Blood Orchid is a 2004 horror film and the first sequel to Anaconda.

A research team is assembled to go to the Indonesian island Borneo, which contains a rare flower only found in that one location on earth: the blood orchid. It is theorized to contain a chemical that can be used for biological immortality, but the orchid only blooms once every 7 years. They make a deal with a local boat owner and set out into the jungle mainland before they crash their boat off a waterfall. As they try to get back to civilization the area they're traveling through turns out to be crawling with dozens of gigantic anacondas: it's mating season.