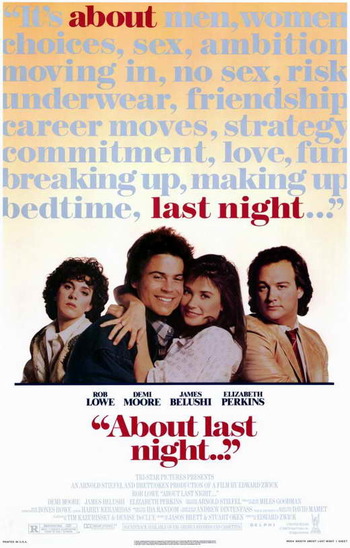 About Last Night... is a 1986 romantic comedy-drama film directed by Edward Zwick, starring Rob Lowe, Demi Moore, James Belushi, and Elizabeth Perkins. It was loosely based on the play Sexual Perversity in Chicago by David Mamet.

Danny (Lowe) and Debbie (Moore) are two Chicago residents who meet at a bar and begin a relationship after a one-night stand. This results in personal problems between the two, including the interference of the couple's disapproving friends, Bernie (Belushi) and Joan (Perkins).

The film was remade in 2014 with an African-American cast, including Michael Ealy, Joy Bryant, Kevin Hart and Regina Hall.