Hired for Their Looks 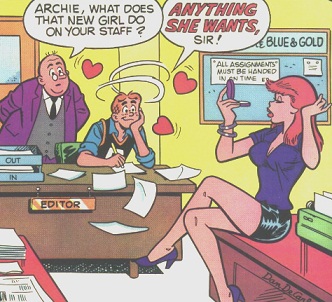 A character is hired for a job solely because of their good looks. Whether or not (usually not) they have the skillset or experience for the job is a non-issue for their employer who just wants some Eye Candy around the workplace. Often times their good looks are a form of job security as in cases where they are glaringly incompetent their employer will often ignore or bear with it for the sake of keeping them around. The employee may therefore be a Ditzy Secretary.

Compare Nepotism for characters hired only because of family ties, Bunny-Ears Lawyer for oddballs who are hired anyway because they're just that good at the job, and Casting Couch, Sleeping Their Way to the Top, or Sleeping with the Boss for cases of outright sexual favors. See also Hollywood Beauty Standards for a related casting trope.