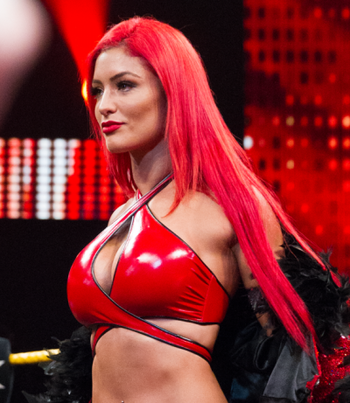 "All Red Everything!"
Advertisement:

From Concord, California, comes the most stylish, elegant, bewitching, eternally beguiling, contentiously charismatic, and fantastically fascinating woman to appear in this or any arena. Allow yourself to be seduced, enchanted, dazzled, and entranced by All Red Everything herself, Eva Marie!

She was one of the most controversial members of WWE's roster in the mid 2010s, for a number of reasons. As a former model, she won an untelevised Diva Search in 2013 and made her debut on Total Divas before making her way to the main roster almost immediately. Due to a combination of her past career, lack of training, horrible technique and the perception that she's using WWE as a stepping stone for Hollywood, she gained one of the largest and most vocal Hatedoms in wrestling history. After recovering from a ruptured breast implant, Eva was taken off of TV in 2015 to train with Brian Kendrick before being moved to NXT in an attempt to salvage her reputation.

After being suspended for violating the Wellness Policy in August of 2016, Eva disappeared from all WWE Programming, including Total Divas, decided not to renew her contract and officially departing on August 3, 2017. She signed a new WWE contract in October 2020 and resumed training at the Performance Centre, before finally redebuting on the June 14, 2021 episode of RAW after a month of vignettes that advertised her return under a character of a "celebrity who wants to help other people", in which she promoted "the Eva-lution". She was released again less than half a year later as part of the 4th November mass talent release.

"ALL RED EVERY TROPE":