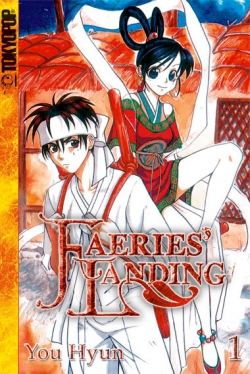 Faeries' Landing (선녀 강림 Seonnyeo Ganglim) is a Manhwa by You Hyun and published by Tokyo Pop in America. The series is largely known for its quirky humor, with several dashes of magical mishaps and more than a few secret plots. It is based off an old Korean tale called ''The Fairy and the Woodcutter''

, a variant version of which is the basis for the Japanese series Ceres, Celestial Legend.

The story starts with Ordinary High-School Student Ryang Jegal literally crashing into a faun named Chun-rok (called Goodfellow in the English translation) who is on the run from the police. In repayment for helping him, Chun-rok lets Ryang see a mystical sight - a trio of gorgeous faeries bathing. Things go wrong when Ryang tears one of the faeries' enchanted gowns, leaving the unlucky owner of that gown to be stranded on Earth and unable to ascend back to the Faeries' realm of Avalon. This faerie, Fanta, predicts that Ryang is destined to go through 108 doomed relationships, and he's going to need her help to get through them. But it won't be easy, since there are other things going on behind the scenes involving someone with a grudge against Fanta and a few other complications in Ryang's 108 evil affinities.