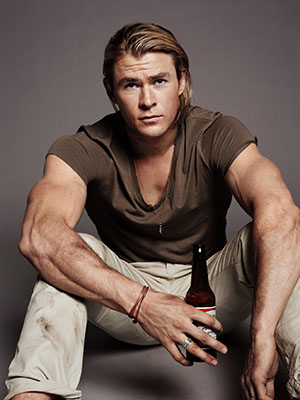 "As a kid, you run around the house pretending to be a superhero, and now to be doing it as a job, I feel very lucky."
Advertisement:

Christopher Hemsworth (born 11 August 1983) is an Australian actor who first became known for acting in the Australian soap opera Home and Away before becoming known in America for his Small Role, Big Impact as George Kirk in J. J. Abrams' Star Trek (2009) reboot. This led to him being cast in by far his best known role as Thor, the Asgardian prince and Norse god of thunder, in the Marvel Cinematic Universe, playing him in his eponymous film in 2011 for the first time and reprising it on several occasions.

Since Thor, he has also earned good notices for his roles in The Cabin in the Woods and Snow White and the Huntsman. He has been seen in Red Dawn (2012), and proven his dramatic range with his performance in Rush, a Biopic about the rivalry between Formula One racers James Hunt and Niki Lauda.

Tropes relating to Chris Hemsworth include: