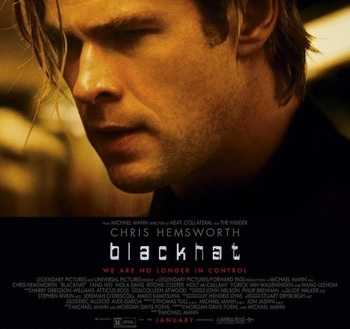 A very chilling message.
Hathaway: You have any idea how much progress you're gonna make on a strike this complex without someone like me? Zero.
Frank: This isn't a negotiation.
Hathaway: Well, I just made it one.
Advertisement:

Blackhat is an action/thriller directed by Michael Mann that stars Chris Hemsworth and Tang Wei, with supporting roles from Viola Davis and Leehom Wang.

A nuclear power plant in China is hacked and its coolant pumps are destroyed without the systems notifying the workers. The Chinese government finds out that the hack was possible by using a Remote Access Tool (RAT) to create a backdoor and that the US also suffered an attack with a similar tool without ill effect. China wants the FBI to release the RAT so that their Chief of Cyber Security Chen Dawai (Wang) can look into it. The FBI hesitantly works with Chen, enlisting the help of their cyber security expert Carol Barrett (Davis), and gives into Chen's demand that convicted hacker Nicholas Hathaway (Hemsworth) be released to help to investigate who's behind the attacks, as the RAT was his tool.

The movie was released to theaters on January 16th, 2015.

Tropes Associated With Blackhat Include: