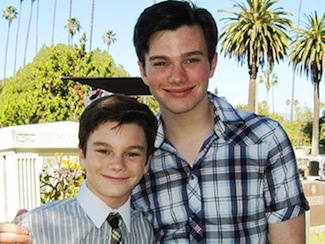 Adam Kolkin and Chris Colfer. No, they're not related.
Advertisement:

Sometimes, casting directors are called upon to cast, say, a parent and child, or two siblings, or a similar-looking stranger to an established character, or a younger and older version of the same character. And sometimes, they find someone that looks so uncannily like the original actor that it comes as a surprise to the viewers that the two aren't actually related.

Not to be confused with Real-Life Relative, which is when the actors actually are related, either by blood or marriage, not necessarily playing relatives, and don't even have to look alike (as family members often don't).