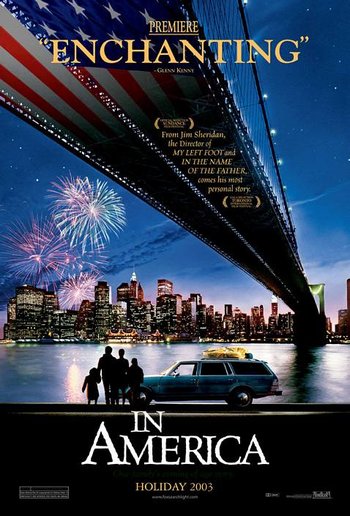 "We heard Manhattan before we ever saw it, a thousand strange voices coming from everywhere."
Advertisement:

In America is a 2002 Irish drama film directed by Jim Sheridan, starring Paddy Considine, Samantha Morton, Djimon Hounsou and Sarah Bolger in her film debut. It is mostly based on Sheridan's real life experiences when he moved to the USA for work.

The story is told from the perspective of Christy Sullivan (Bolger), a ten-year-old Irish girl whose family emigrates to America for a fresh start. She and her younger sister Ariel (played by Bolger's real life sister Emma) have recently lost their baby brother Frankie to a brain tumour and the family is struggling to cope. Navigating the hardships of their new life in New York City, and a growing friendship with an African man called Mateo (Hounsou) who lives in their building, help the family to grow and move past the tragedy.