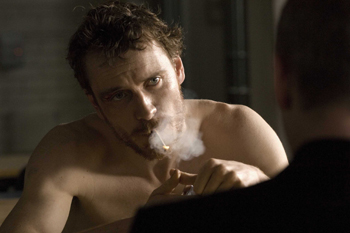 Hunger is a 2008 Irish-British historical drama film, the first to be directed by artist Steve McQueen (Director) and the first of several collaborations between McQueen and actor Michael Fassbender.

It revolves around the Maze Prison during The Troubles, and the various ways they protest to regain their political status (revoked by the British government in 1976), starting with "no-wash" protests and ending in a hunger strike — as led by Irish Republican Army member Bobby Sands (Fassbender).

Hunger premiered at the 2008 Cannes Film Festival, winning the Caméra d'Or award (an honor for first-time filmmakers) as well as several more awards throughout the 2008-2009 European circuit.

Tropes used in Hunger include: