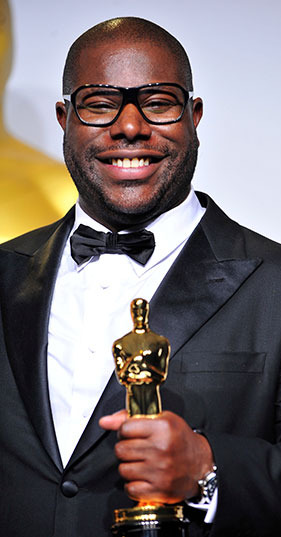 This entire entry was typed in a single, uninterrupted take.
Advertisement:

McQueen started out directing black-and-white minimalist shorts designed to be projected onto the walls of art galleries. He has often cited inspiration from Andy Warhol and Buster Keaton, winning the Turner prize (Britain's highest artistic honor) in 1999 for Deadpan

, a short inspired by the infamous collapsing house stunt from Steamboat Bill, Jr.. McQueen has also dabbled in sculpture and photography, and received a great deal of acclaim for his 2007 work Queen and Country, a collection of stamps commemorating all of the British soldiers who died fighting in Iraq between 2003 and 2008, though he considers the work incomplete as the stamps have yet to be released to the general public for use.

In 2008, McQueen made his first foray into feature films with Hunger, a drama about the 1981 Irish Hunger Strike, which received great critical acclaim, winning the Caméra d'Or (first-time director) Award at the Cannes Film Festival. He followed this up with Shame, a drama about sex addiction that received similar acclaim, particularly for the performances of Michael Fassbender and Carey Mulligan. In 2013, McQueen released 12 Years a Slave, a drama based on the memoirs of Solomon Northup, a free black man who was kidnapped and sold into slavery. This was McQueen's most acclaimed film yet, winning many prizes, including the Academy Award for Best Picture, making Steve McQueen the first black director who have directed a movie that won the top prizenote he did not, however, win Best Director. That went to Alfonso Cuarón for the film Gravity

McQueen next directed Widows, a heist film about widowed women who must carry out a robbery after their husbands die in a theft of their own, based on the 1981 British TV series. He is believed to be developing a biopic of Paul Robeson. In 2020, he directed all five installments of the BBC/Amazon anthology film series Small Axe, about West Indian immigrants in London in The '60s and The '70s.

Known for his use of long takes, relentless realism, and often working with Michael Fassbender.

Not to be confused with the American actor.