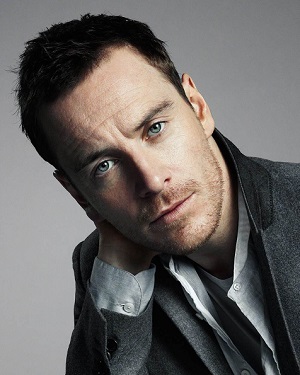 "What I find really interesting is to try and mix it up, to push myself and try different things. I don't want to stay in my comfort zone. I want to take risks and keep myself scared."
Advertisement:

Michael Fassbender (born April 2, 1977 in Heidelberg, Germany) is an Irish–German screen and stage actor and producer.

His feature film debut was in the fantasy war epic 300 (2007) as a Spartan warrior; his earlier roles included starring roles on television such as in the HBO miniseries Band of Brothers (2001) and the Sky One fantasy drama Hex (2004). He first came to prominence after starring in the 2008 film Hunger about the 1981 Irish hunger strike. While the film had a fairly limited release, Fassbender's intense performance got a lot of praise.

He had a handful of other notable roles over the next two years, but things really took off in 2011. That year he played more coveted (and well-received) roles than many actors have in their entire career including Magneto in X-Men: First Class, Carl Jung in A Dangerous Method, and Mr. Rochester in Jane Eyre. He is known for his broodingly intense persona and dark charisma. While having a quick career turn is not uncommon for actors, few have been in so many high-profile roles so successfully. His career seems to be continuing strongly with roles in big films like Ridley Scott's Prometheus. In 2013 he returned to work with Steve McQueen, the director of Hunger and Shame, and played slaveowner Edwin Epps in 12 Years a Slave, a role he has garnered massive acclaim for, including nominations for an Oscar, a Golden Globe and a SAG Award.

He's been married to Alicia Vikander since 2017. They have one child. He also may or may not be a shark.