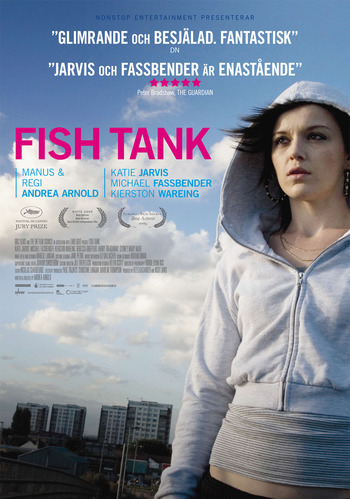 Fish Tank is a 2009 film written and directed by Andrea Arnold.

The headbutting gets Mia a ticket to reform school—she'll be boarding there, much to the unconcealed delight of Joanne. Mia has her own dreams of getting out of the neighborhood and aspires to be a hip-hop dancer, which she constantly practices. Another possible way out appears in the form of Conor (Michael Fassbender), Joanne's handsome, charming new boyfriend, who for a little while appears to be a possible father figure to Mia. But Conor is not all that he seems.

See also Wasp, Andrea Arnold's 2003 quasi-Perspective Flip on this film, a short film with the same setting and similar characters but posed from the perspective of the unfit mother.